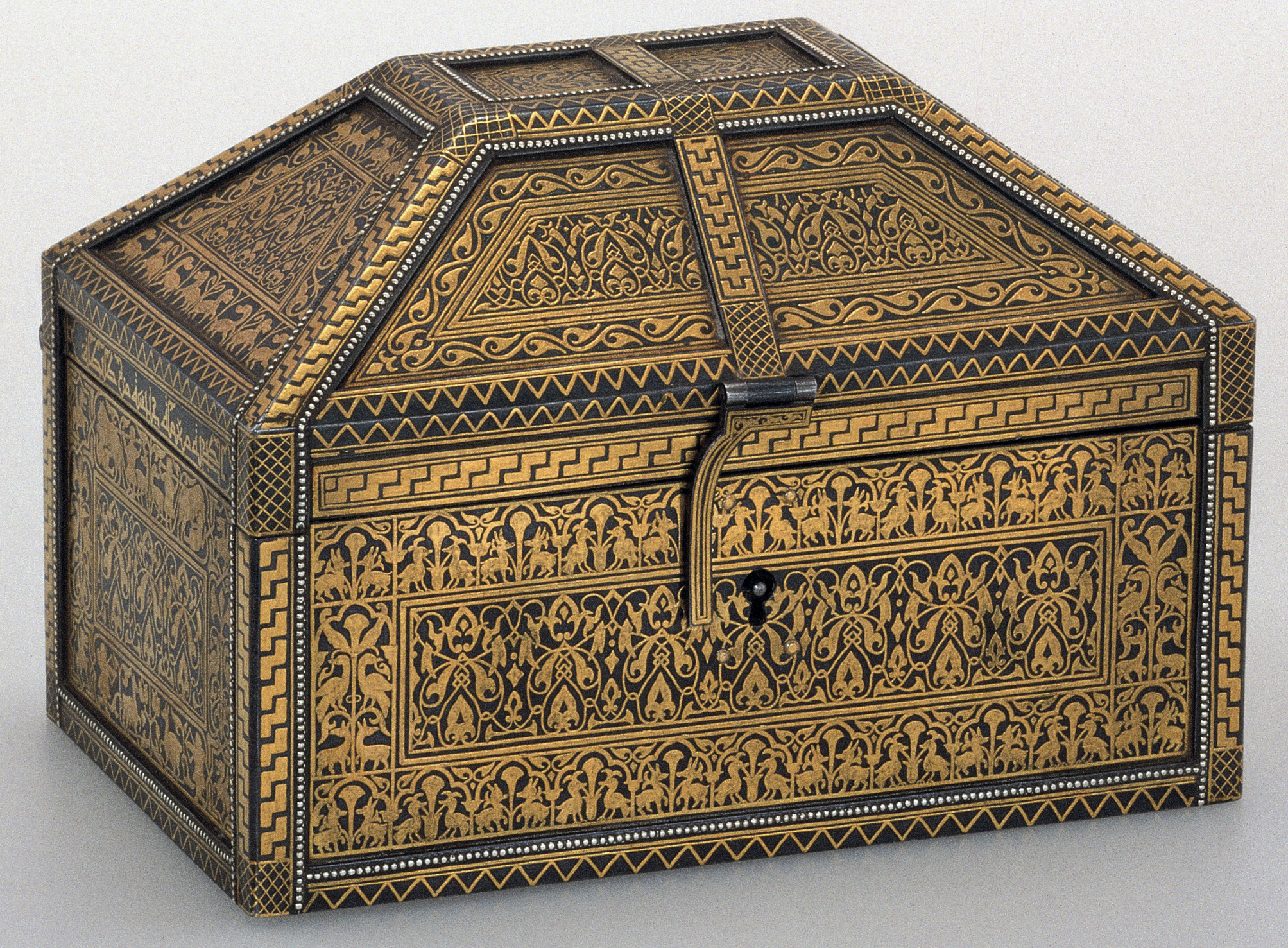 This casket is constructed of iron plates attached at their juncture by angled iron strips. The four sides of the lid are trapezia which slant inward and are capped by a small rectangular plate. A keyed lock with a slender offset hasp secured the lid, which is hinged from behind. It is profusely covered with heavy gold-wire damascene in defined plaques and borders filled with Islamic animal and vegetal motifs. A Kufic inscription extends across the lower edge of the lid on the left side.

This casket does not conform to any recognized type of Toledo damascene work, yet must certainly have been produced in that city. The unusual appearance is due to the fact that this is an almost faithful copy of the so-called Palencia Casket now in the Archaeological Museum, Madrid. The latter piece, made of wood covered with ivory plaques and reinforced with gilt-bronze enamelled straps, was made in the ivory workshops at Cuenca and is dated AD 1049-50/AH 441.

The artist of the present casket, which is slightly less than half the size of the original, has copied the themes of the ivory panels almost exactly: the addorsed and confronted birds and animals on either side of the tree of life, frets and triangles in series along the corner supports. These imitate the caliphal ornament of Córdoba as well as the architectural decoration of Toledo. The bow of the hasp of the lock also imitates the shape of the original. However, in the original piece the patterns on the strapwork are executed in green, blue, and what was probably red enamel. In adittion, the original bears a dedicatory inscription around the entire base of the lid, while here the left and right sides each contain the Arabic inscription al-tabajiyyah [?] my’ammalah Janīhah [?] min Talītalah’, of uncertain interpretation except for the clear reference to Toledo (Talītalah).

This casket is an object of very superior quality, and it is difficult to treat it as a strictly commercial piece. It is possible that it represents a special order or commission which would have been executed from photographs. During the late nineteenth century there was a fad for collecting early Spanish artefacts, which resulted in the manufacture of counterfeit objects ranging from archaeological pieces to early arms, enamels, and similar items. While this casket does not appear to have been produced for such a purpose, the contemporary interest in Spain’s early cultures may have motivated its production.