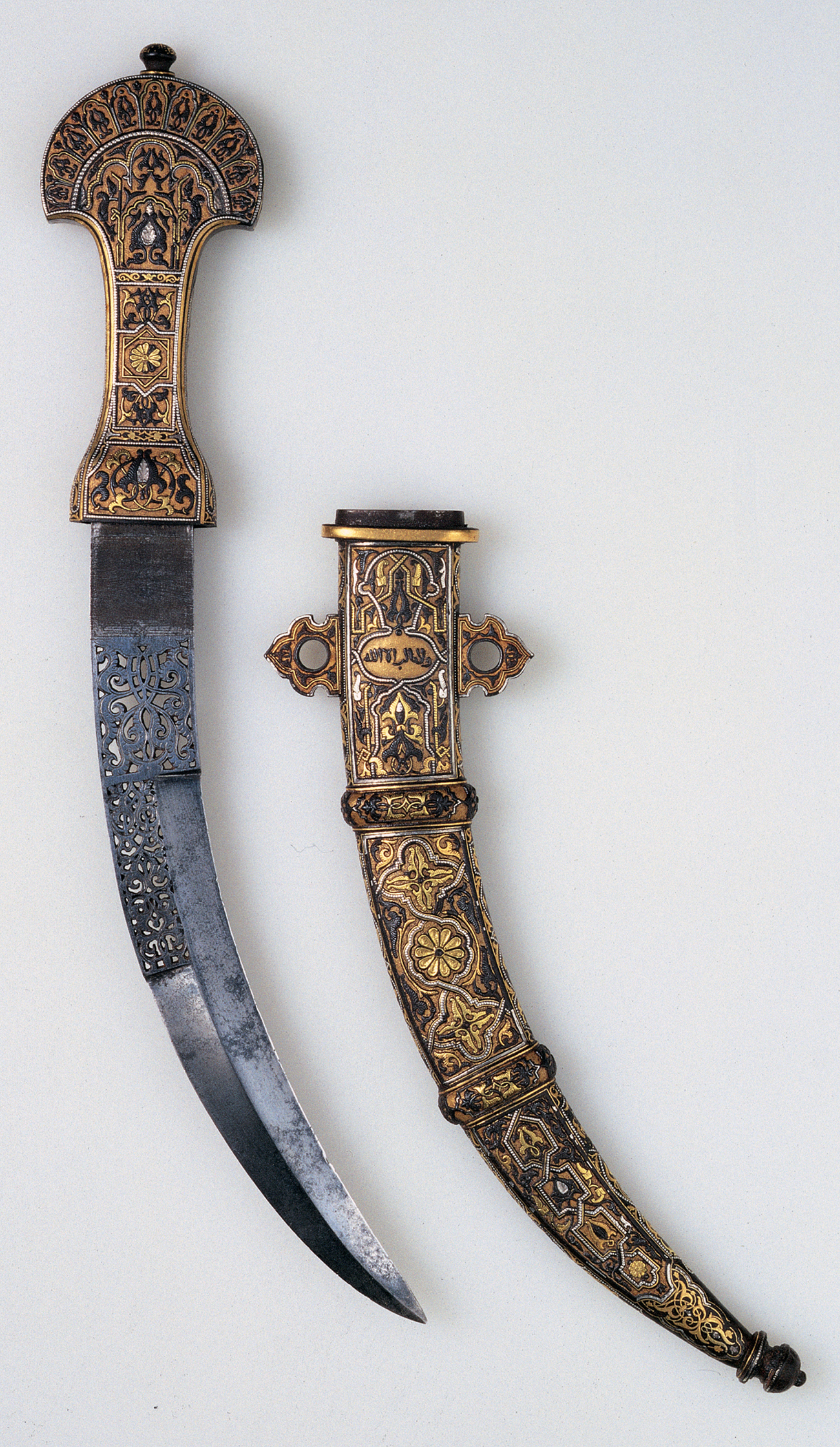 This jambiya is constructed in the same manner as ZUL 114. Its forged iron hilt is quite heavy, unlike the predominantly wooden hilts of the originals, and its decoration consists of relief designs achieved through reduction of the background by punching below the original surface level. The resulting relief ornament, consisting of palmettes, arches, an eight-pointed star, and other conventional Islamic motifs, has been both blackened and polished bright. The background has been stippled and covered with heavy gold leaf. The fan-shaped ‘pommel’ is decorated with a series of arches imitating Nasrid plaster ornament. Silver beading separates the ‘fan’ from the grip, which has two narrow horizontal bands containing gold wire damascening. In the upper and lower ends of the grip are two small silver inlays, and the area immediately adjacent to the blade has four palmettes of green gold in relief.

The blade bears more resemblance to that of the conventional jambiya in having one long and one shorter edge, but the ricasso is greatly exaggerated. Adjacent to the hilt the blade has been roughly filed, apparently to obliterate what must have been a Toledo inscription in order to make the piece appear Islamic. The continuation of this flat area is elaborately pierced in the form of stylized palmettes, which are also chiselled.

The iron scabbard is divided into three sections by two raised iron bands that simulate bands for a sabre-hanger, but have no function here other than decorative. The scabbard is suspended by rings (missing) that pass through two projections near its top. These are identical to those of the authentic Moroccan jambiya. The upper area of the scabbard has a central oval plaque with a matte gold ground containing the Nasrid motto. The remaining space is filled with geometrical designs in beaded silver wire, gold wire, and black, red, and green gold foliage, all over a punched gold ground. The central section contains three elements, a central chrysanthemum with palmettes in the shape of a cross above and below. These are surrounded by silver beading. The small remaining area has foliage in black iron over a stippled gold ground. The lower section contains smaller foliate elements and a chrysanthemum also surrounded by silver beading. The chape at the tip is damascened in gold wire as are the two edges of the scabbard.

This dagger is a commercial Toledo product of excellent quality. The similarity between its decorative themes and those of the presentation jambiya ZUL 114, would suggest that this item was also produced at the Royal Artillery Factory.