This oval iron plaque is decorated with repoussé which has been given detail with chiselling and has applied ornament in gold and silver damascene. Its area is divided into two decorative fields. A central oval contains an allegorical scene: in its upper half a silver mythological goddess-like figure, seated on a throne, holds in her left hand what appears to be a scroll or tablet with the word ‘TELE|GRAFIA’. On her head in the manner of a crown is a circular object from which radiate seven silver rays. Her right hand is raised, as if blessing, and touches the lowest of the rays on the left. Her figure, the throne, and the tablet are decorated with gold wire set in incised lines and damascened over hatching.

Below the throne, in the centre of the plaque, is a horizontal oval frame enclosing the Spanish royal crown over a bundle of lightning bolts tied in their middle. At the bottom of the frame a wreath of laurel and palm extends upwards to enclose the lower half of this composition. Two ribbons twine around the frame; the upper contains the words ‘AL EXMO SOR D. CANDIDO MARTINEZ’, the lower, ‘EL CUERPO DE TELEGRAFOS’ (To the Most Excellent Gentleman Don Candido Martínez…The Telegraph Corps). At the bottom of the composition, to either side, are two putti, the lower half of whose bodies turn into acanthus foliage growing grotesque heads in volutes up both sides of the central plaque to terminate on either side of the throne. On a small base between the putti are four pile batteries with wires going in both directions. Below this is a ribbon with the words ‘CADIZ’ and ‘CANARIAS’ (Canary Islands). The putto on the left speaks into a mouthpiece held in his hand, while the other listens at an earphone likewise held. At the top of the oval, on either side of the goddess, the upper volutes of the plants support two telegraph instruments.

The inner panel is separated from the larger oval by a roped silver border. The area between the inner oval plaque and the outside edge of the larger oval forms a broad band. This is filled with grotesque animals and rinceaux. In addition, beginning at the top are six slightly convex circles in shields evenly spaced within the oval band. Each circle bears a different date, reading: 8|JUNIO|1880, 29|DIBRE|1881, 13|DIBRE|1882, 11|FEBRERO|1881, 1|JULIO|1882, 26|ABRIL|1881. Between these are objects having to do with telegraphy or electricity.

Around the entire oval plaque is an elaborate border of iron repoussé with piercings containing floral volutes and cornucopias. A twisted and spiralled ribbon-like iron band forms the outer border of the entire plaque. A classical urn is contained in this decoration at the top of the composition; flowers in the shape of shells are at the midpoint of both sides; and at the bottom, in a curled parchment-like area, is damascene ornament containing the damascened word ‘TOLEDO’.

The iron of the plaque has been blued overall. In the oval section the repoussé is raised above a punched background covered with heavy gold leaf. All areas containing inscriptions, and the other ribboned areas, are finely hatched and damascened in gold wire. The repoussé border is polished and blued, and some leaves and flowers have been gilded.

This plaque shows a multitude of techniques: inlay, sheet overlay, and wire damascening have all been employed. The inlaid wire along the high points of the chiselled repoussé is a technique used by Eusebio Zuloaga in the 1850s.

This plaque is obviously an award to Cándido Martínez, possibly by the Telegraph Corps, around 1882. This individual has not been identified, nor has the occasion of the presentation. 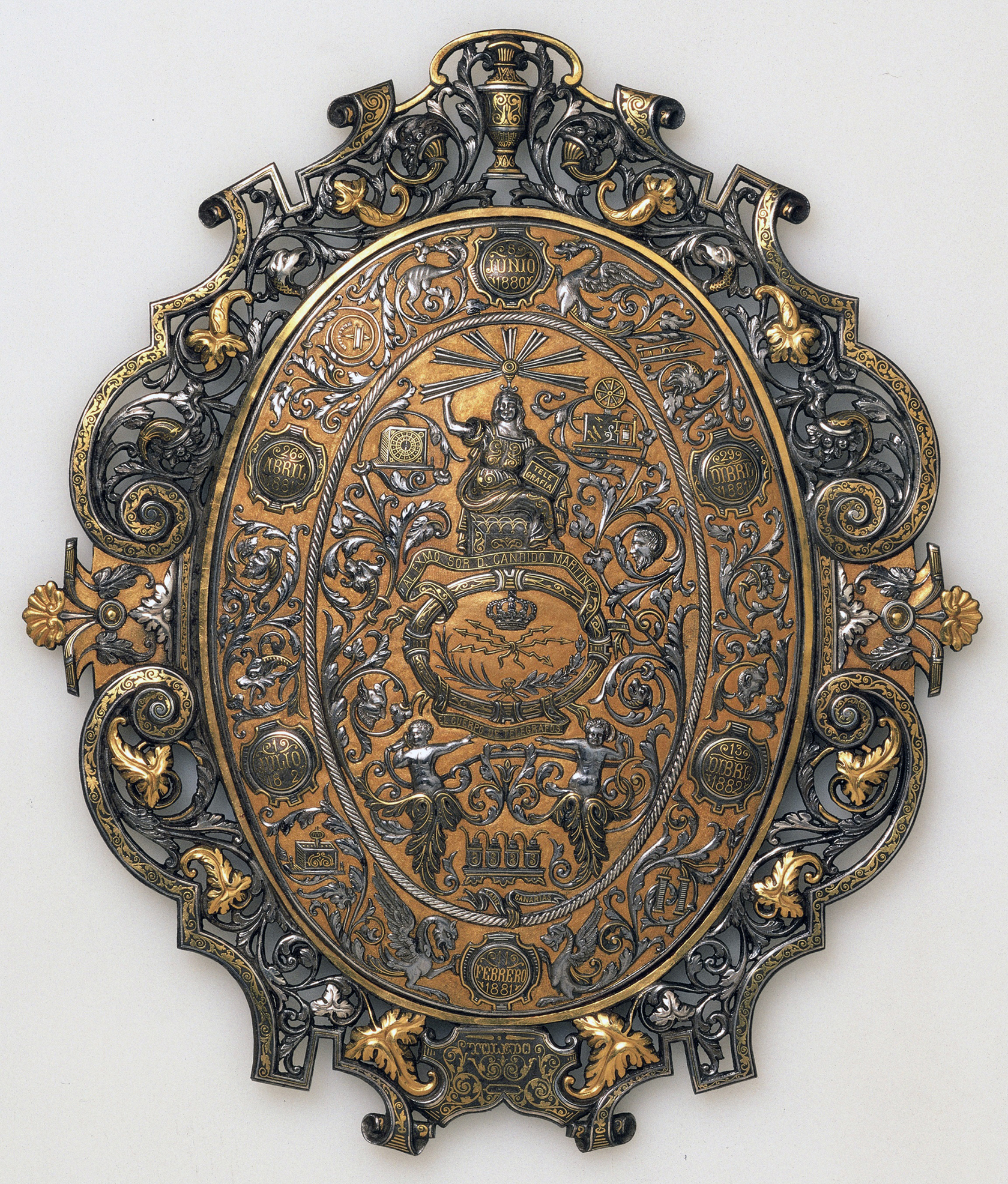